ALS pathology is only partially understood. TDP-43 proteins play an essential role in the mechanisms of this severe disease. Some evidence indicates that TDP-43 is an early marker of this disease starting from the neuromuscular junction.

NeuroProof investigated several markers of ALS in an automated imaging approach with the CQ1 system from Yokogawa in collaboration with Cenibra GmbH. In this study, TDP-43 was present in axons in C9orf72 spinal motor neurons, which is in concordance with other publications.

Phenotypic screening of human iPSC-derived motor neurons from patients with familial history is an excellent opportunity for screening new therapies for this severe disease.

NeuroProof has tested diseased ALS motor neurons with and without co-cultures of astrocytes in several screening assays besides its electrophysiological screening on its microelectrode array recording platform. 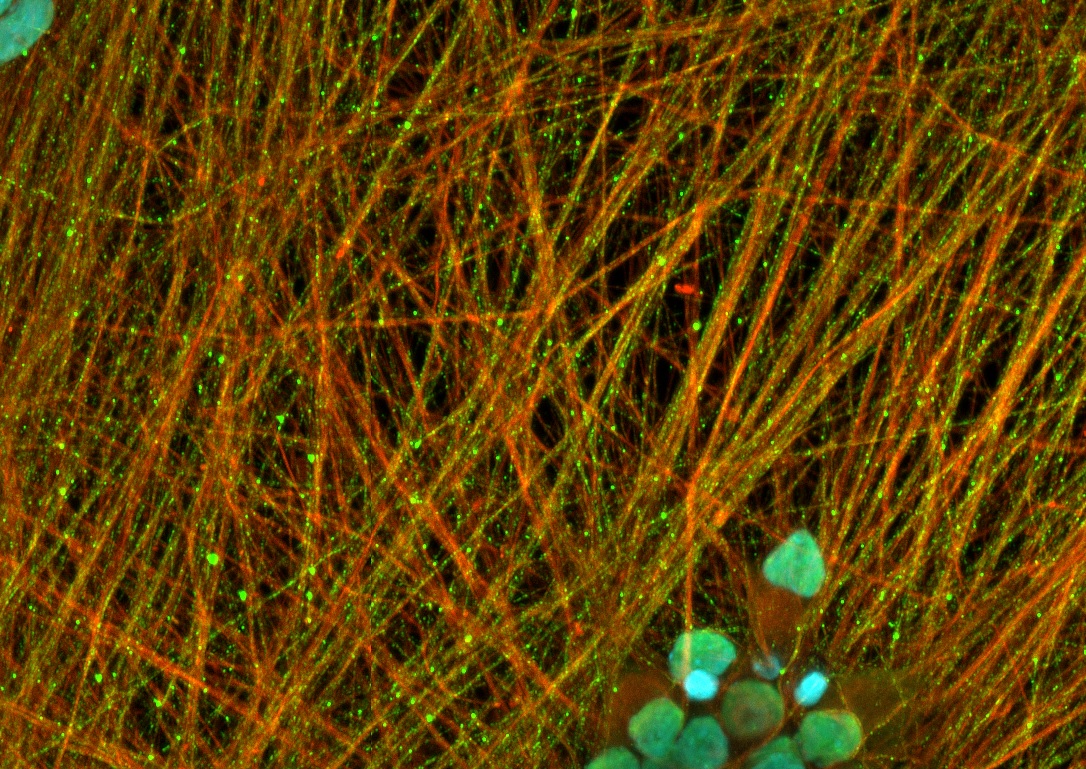 In the picture, we have stained C9orf72 human iPSC-derived motor neurons after 14 days in vitro with a TDP-43 antibody (green, nuclei with DAPI in blue, and cytoskeleton with ß-III-Tubulin in red).

We developed a functional phenotypic assay with a diseased human cell line from a fragile X patient.

We screened more than 200 compounds in this model with an MEA screen.

We identified the phosphodiesterase 10A inhibitor balipodect (TAK-063) as a potential new treatment for FXS.

We compared the potential therapeutic effects of balipodect, mavoglurant, arbaclofen, and lovastatin with this model.

Compared to wild-type cell lines, the hyper excitation of diseased ALS cell lines with a C9orf72 and a SOD1 mutation is shown.

The effect of astrocytes on neuronal activity was investigated.

The effects of riluzole and spermidine in these models are shown.

Nov 16 at 8:00 AM
Validation of Models for Amyotrophic Lateral Sclerosis with human iPSC Motor-derived Neurons

In the picture, we have stained C9orf72 human iPSC-derived motor neurons after 14 days in vitro with a TDP-43 antibody (green, nuclei with DAPI in blue, and cytoskeleton with ß-III-Tubulin in red).

Visit our presenter and discuss our new developments.

GBA mutations with relevance in Gaucher's and Parkinson's disease.

The molecular pathways of these lysosomal storage disorders and their relation to Parkinson’s disease are not fully understood. GBA mutations decrease the activity of GCase, causing an increase in alpha-synuclein. A phenotypic screen promises an excellent approach for drug testing.

Patients with Gaucher’s disease also experience neurological symptoms that can not be treated by enzyme replacement or substrate reduction therapies because of their missing capacity to cross the blood-brain barrier.
For the discovery of new Gaucher’s and Parkinson’s treatments, testing compounds in different GBA mutated diseases will increase predictivity significantly.

Neuroproof can now deliver screening services with human iPSC-derived glutamatergic neuron disease models, starting with a GBA null/null mutation and others following soon. The cells were grown on MEA-plates and showed a hyperexcited activity pattern and a clear difference between the mutated and the diseased cell lines. On customer request, NeuroProof combines its MEA screening with molecular readouts for phosphorylated alpha-synuclein expression, for example.

To learn more about these new assays, contact us to request more information.