Parkinson’s disease (PD) is caused by specific loss of dopaminergic neurons in the substantia nigra/midbrain and resulting lack of neuronal signals into the striatum which leads to motor and cognitive dysfunctions. Parkinson’s disease etiology is only partially understood. Disease models cover a wide range of approaches by using Parkinsonism provoking agents as MPP+, Rhotenon, or 6-OHDA or modeling this neurodegenerative disease with suspected disease-relevant proteins as alpha-synuclein filaments. The third kind of approach uses genetically modified cell lines with Parkinson’s disease-causing mutations as A53T, LRRK2, or PARK mutation to call only two. Patient-derived human cell lines established via iPSC reprogramming and differentiating of these toward dopaminergic cell cultures with a ventral midbrain type with Parkinson's mutations have a great promise for better and more predictive disease models. For this NeuroProof has developed different dopaminergic cell culture protocols on microelectrode arrays, for more information, see our page on neural stem cells.

Neuronal in vitro disease models containing dopaminergic neurons allow the testing of PD drug candidates. One of these established in vitro models is based on MPP+, 1-methyl-4-phenylpyridinium, which is the metabolite of MPTP, 1-Methyl-4-phenyl-1,2,3,6-tetrahydropyridin, a neurotoxin that causes symptoms of Parkinson’s disease. MPP+ induces oxidative stress and neurotoxicity specifically affecting dopaminergic neurons. The NeuroProof platform is able to quantify functional effects before these neurotoxic, i.e. cytotoxic events are induced, which of course affect the neuronal network activity dramatically induced by loss of neurons.

We investigate the functional effects induced by MPP+ at a concentration that affects neuronal activity, neurite, and synapse morphology but not yet kills neurons. Thus, we focus on the early pathophysiological effects of PD and show that a pre-treatment with endogenous trophic factors such as GDNF or BDNF is able to prevent the functional and morphological effects.

Alpha-synuclein filaments influence the neuronal development of primary mouse midbrain cultures. We have optimized this approach so that a robust and reproducible read-out ensures the consistency of your results. 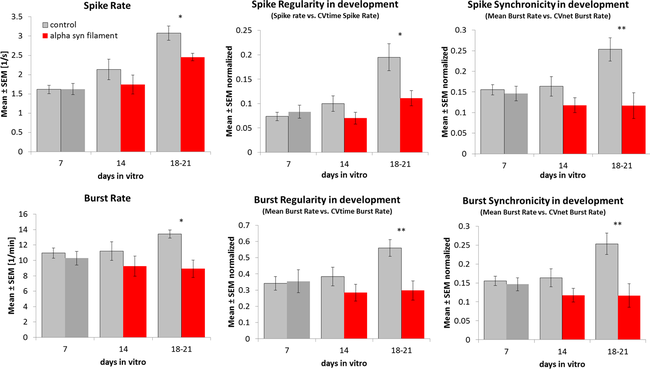 For your screening project, we deliver the most relevant screening assay. Discuss with our experts your needs, so that we can deliver an appealing proposal.

So you can select between human and mouse cultures, different disease-provoking compounds, or different genetic mutations or patient cell lines.