Video presentation: our ALS assay Contact us for further information!

ALS is a rare disease with no clear etiology. 10% of patients have a familial hereditary form of ALS - familial ALS, fALS -, but most of the patients, 90%, suffer from sporadic ALS. Sporadic and familial forms are clinically identical.

Familial ALS is caused by mutations of C9ORF72, SOD1, TDP43, and others.

The mutations C9ORF72, SOD1, and TDP43 cover different pathological mechanisms of ALS so that phenotypic assays with mutated iPSC-derived motor neurons will gain their predictive power.

The C9ORF72 gene is implicated in ALS through the repetition of GGGGCCG expansion in non-coding regions with effects on RNA binding and autophagy regulation.

The mutations of SOD1 affect the enzyme Cu/Zn-superoxide dismutase 1. These mutations cause the degeneration of motor neurons by oxidative stress, protein aggregates, mitochondrial defects, and glutamate excitotoxicity.

The TAR DNA-binding protein 43 (TDP-43) is another mutation that causes fALS. The misfolded protein TDP43 contributes to motor neuron death. It is supposed that SOD1 mutation and misfolding of TDP43 are related.

Both mutated cell lines with the SOD1 and the C9ORF72 mutation reveal disturbed excitatory-inhibitory balance, E/I balance. In particular, iPSC derived motoneuron cultures with a SOD1, or a C9ORF72 mutation shows a hyper-excitation in comparison to the healthy control as described above. 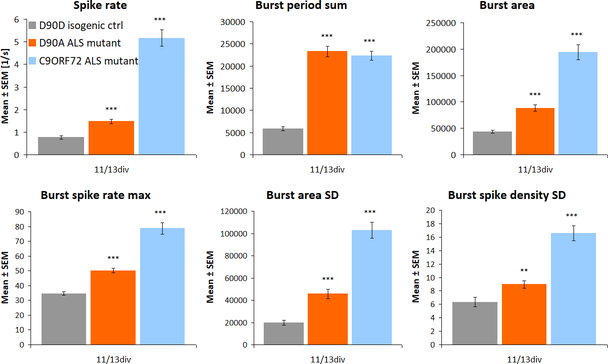 As an example, we illustrate a rescue assay that rescues the electrical activity pattern of a mutated SOD1 iPSC derived motor neuron cell line back to a healthy phenotype, here the activity of ist isogenic control cell line. We recorded the spike train data at day 11 in vitro,

The functional phenotypic readouts of the MEA recordings can be supplemented by further readouts, as detection of TDP-43 aggregates or a survival assay.

NeuroProof offers screening services with its unique screening technology  for a wide range of diseases.